We are grieved about what is happening in the world and our hearts go out to the people who are hurting.

In the past few weeks, news of the death of George Floyd has taken the world by storm after the release of news reports and video footages circulated the internet. This protest has sparked protests and a surge of posts on social media addressing the issue of racism in the U.S. and other parts of the world, demanding for a change. Much closer to home, this has also sparked conversations regarding the social discrimination faced by minority groups here in Malaysia, and in particular rekindled the #MigranJugaManusia movement.

We here at EAP Malaysia celebrate World Autism Awareness Month annually to advocate for the acceptance and inclusion of individuals with autism into our societies and communities. As advocates of inclusivity, we stand by our belief that every human – whether an individual has autism, a physical or mental disability, is born with a different skin colour, or is seeking refuge from another country – has inherent worth and value and deserves to be treated as such. This article highlights the reasons and shares resources to have this conversation with your children.

Malaysia is a melting pot of culture- from the smell of food wafting  through the air as one explores a busy night market, to the spoken languages one can make out from overhearing the conversations while dining at a mamak, to the decked up malls and streets during the festive seasons. The cultural diversity in these experiences are in fact the things that tourists enjoy when they visit Malaysia, that yet we, citizens, so often take for granted.

The stories and reports highlighting the discrimination experienced by marginalised groups such as the minority races, refugees, and individuals with disabilities, that have resurfaced recently are heart wrenching. Education, employment, and housing are but a few of the areas that are less accessible to them, and even when they do become accessible, it is not without much hardship. In schools, children of these groups are often bullied and ostracised due to their differences and many of them are not taught to speak up or defend themselves. All these amount to the strong getting stronger and the weak getting weaker, a never-ending cycle that only widens the disparity and causes divide.

Lest our future generations continue to suffer from these practices of discrimination that have been ingrained into our systems, these social injustices need to be addressed more openly in schools and households.

According to a statement released by the American Academy of Paediatrics on the Impact of Racism on Child and Adolescent Health, infants are aware of the race-based phenotypic differences. This means that children are generally able to recognise differences between each other at a very early age. As a result, our school-going kiddos often report being bullied. Therefore, it is never too young to begin educating your children about being kind and accepting one another’s differences.

Each year in conjunction with World Autism Month, we at EAP run acceptance campaigns in various schools and universities across the Klang Valley, to raise awareness about autism and educate children and youths about accepting one another despite our differences. As part of our presentation, we also teach children about bullying and how they can learn to not only stand up for themselves, but speak up for their friends too.

For kindergarten-aged children, Sesame Street has a wealth of resources that can help to open up the conversation about differences to your children. The following are links to the relevant resources:

Children begin to develop the Theory of Mind- the ability to think about what others are thinking and how they may be feeling- between the ages of 4 to 5, and this continues to develop for the next several years. As such, it is important to begin to teach them to think of other people’s perspective, even from those tender ages. Other People’s Perspective is a programme that we teach our school-going kiddos to encourage them to treat them the way they would like to be treated. For younger children, what this would look like is sharing toys and playing with everyone in their class; for primary school children, it may mean helping out a friend struggling with their homework or inviting them to eat together during recess.

Teaching Children To Stand Up For Themselves and Others

We also teach our kiddos to stand up for themselves and their friends when being bullied. One of the simple ways to help them remember what they can do in such situations is the “Hi 5 Anti-Bullying Model” adapted from Tamborine Mountain State School. It is important to encourage our children not just to stand up for themselves, but for their friends too as many of the children who are bullied are too afraid, may face language barriers, or have disabilities that prevent them from being able to defend themselves.  The 5 rules are illustrated in the following image: 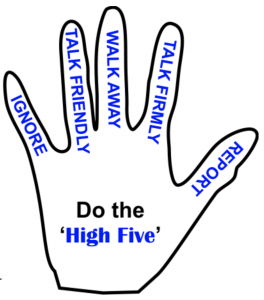 It is also important to remind our children that being different is not a weakness, but rather a strength. You can illustrate this through the superhero cartoons that they watch- each of them is different and unique and yet, it is because of their differences that they become stronger when they band together to achieve a common goal.

Showing Kindness and Acceptance Towards Everyone

What is our common goal? Ultimately, our goal is kindness and acceptance towards everyone. Earlier this year in conjunction with World Autism Awareness Day, we released our autism awareness video, featuring one of our kiddos with autism, who discusses about differences and ultimately encourages us all to be kind to one another!

We hope that these tips and resources come in handy as you have this important conversation with your children, especially during a time like this. We look forward to the day where Malaysia truly becomes a safe haven for all people groups, where every individual is treated with respect, and each person’s worth is valued.