In conjunction with International Women’s Day on the 8th of March, we would like to feature an incredible female figure on the spectrum – Greta Thunberg! The following incredible facts of Greta Thunberg were compiled by a volunteer named Ozayr from Alice Smith School, as part of his community service project. “Given the right circumstances, being different is a superpower”

Greta Thunberg was born in Stockholm, Sweden, on 3 January 2003. She is an environmentalist, known for her work to address climate change.

She first heard about the issue of climate change at the age of 8 and stopped speaking and eating temporarily when she was 11, because she was depressed knowing that little was done to address the issue. (Photo taken from The Guardian)

Thunberg rose up to speak in August 2018, at the age of 15, where she started the movement – School Strike for Climate. Every Friday, she would skip school to raise awareness on climate change, and these Fridays were called Fridays for Future.

Thunberg would sit outside the Swedish parliament where she held up sign boards protesting to save the environment and stop global warming. Her action inspired hundreds of thousands of students around the world to participate in their own Fridays for Future.

Did you know that Greta is on the autism spectrum?

How did Thunberg use her Autism to save the planet?

What has Thunberg done lately about the environment? 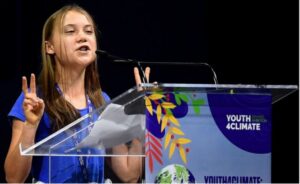 Ozayr from Alice Smith School, who contributed to this article, sees Greta Thunberg as a great role model for autism awareness and environmental awareness, as she turned her difference into her superpower to help the planet!